Flogas Britain, one of the UK’s leading liquefied petroleum gas (LPG) suppliers, has revealed plans to construct a gas pipeline into what will become the nation’s largest above ground LPG storage terminal, at Avonmouth, near Bristol. 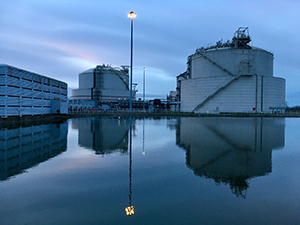 As announced in July, work has commenced on the Avonmouth facility which will see it converted from LNG (liquefied natural gas) to LPG storage. It is estimated the terminal will be operational by the summer 2022, with completion of the pipeline expected in 2024.
Starting at Bristol port, the pipeline will largely follow existing routes through predominantly industrial areas to the Flogas Avonmouth storage facility.

Running underground for most of its course, the twin-pipeline will vastly increase the availability of LPG, enabling up to 20,000 tonnes of commodity to be safely and securely discharged from a ship in 24 hours.

Once operational, the site will play a crucial role in facilitating the decarbonisation of off-grid Britain, in line with the Government’s 2050 net zero target. Additionally, and consistent with Flogas’ 2040 vision to build a lower carbon future for off-grid homes and businesses, the facility will possess the capability to import and store bio-LPG which is a chemically identical renewable alternative.
Lee Gannon, Flogas Britain’s Managing Director, said: “This demonstrates very clearly our commitment to our customers and the decarbonisation challenges that lie ahead for all of us.”
“As demand grows, Flogas will be at the heart of providing much greater security of LPG supply to commercial and residential customers nationwide.”
Lee Gannon continued: “The addition of the pipeline at Avonmouth is a huge step towards helping off-grid homes and businesses transition from high carbon fossil fuels to a drop in low carbon alternative which will reduce the nation’s carbon footprint, whilst supporting the Governments ambition to achieve its Clean Growth Strategy objectives.”