The most advanced high strength magnet technology will be on show on the Bunting Magnetics stand at the Cenex-LCV 2018 event (Millbrook, Bedfordshire, UK, 12th and 13th September 2018).  Cenex-LCV is the UK’s premier low carbon vehicle event.  There is an exhibition area as well as an extensive seminar programme.

Bunting Magnetics is a world leader in the supply of Magnets, Technical Magnetic Assemblies, and Magnetisers.  The European manufacturing and design headquarters are based in Berkhamsted in Hertfordshire.

Presently in the UK, there are approximately 26 million registered cars of which 37,500 are alternatively fuelled (i.e. they do not run on petrol or diesel).  For many car owners, the decision on whether to purchase an electric car is dependent on their mileage.  Improvements in battery technology continue to extend the distances electric cars can travel with Nissan announcing a 168 mile range for the latest Leaf electric car.  Even Jaguar has announced plans to develop the E-type Zero sports car.

Magnets are present in any item that uses a motor or electricity to function.  Electric cars included.  One of the primary components in any electric motor is the magnet.  Inside the motor is a spinning wire coil that is surrounded by strong permanent magnets, commonly Neodymium Rare Earth.  When an electric current is induced in the coil, it emits a magnetic field, opposing the magnetic field emitted by the strong magnets.

When the same pole of a magnet is pushed together, they repel.  The same principal is used inside an electric motor.  In this case, the repulsion caused by the opposing magnetic field causes the coil to spin at a high speed.  The coil is attached to an axle that drives movement in the wheels.  The continued rise in popularity of electric cars and wind turbines for wind energy is considered to be one of the reasons for a rise in the price of Rare Earth minerals. 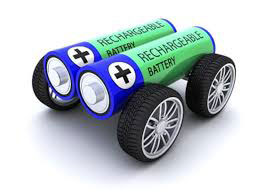 At the Cenex-LCV 2018 event, Bunting will be showing new developments in permanent magnet technology.  The latest permanent Magnet can now maintain their magnetic properties at higher temperatures.  The development of these new Neodymium Rare Earth Magnets is based upon Grain Boundary Diffusion technology and maximising the advantages of adding Dysprosium into the magnet mix.

With added Dysprosium, the magnet will suffer less loss in the same temperature condition, but will be more expensive and have a lower residual magnetic induction or magnetic remanence, otherwise known as Br and BHmax (if the original grade was greater than 35MGOe).

Rather than add expensive Dysprosium to the total mix and waste it in the middle of a grain, new technology allows the Dysprosium to diffuse from the surface around all of the the grain boundaries.  In Grain Boundary Diffusion (GBD) technology, when the heat treatment temperature is higher than the melting point of Nd-rich phase, then the Dysprosium/Terbium compound on the magnet’s surface can penetrate into the magnet through its grain boundary.

By reducing the Dysprosium in the grain and ensuring it is only at the boundary the Br and BHmax remain unchanged and less Dysprosium is used in the production process, reducing the manufacturing cost.

This new technology is being used by Bunting Magnetics in the UK to produce a range of grades of higher performing Neodymium (NbFeB) Rare Earth Magnets.

For further information on the new Neodymium Magnets or for any other application where magnets or magnetic forces are needed, please contact us on press@buntingeurope.com