The Crow Park Hotel in Keswick in the heart of the Lake District National Park has been owned for the last 13 years by Ian Finn. 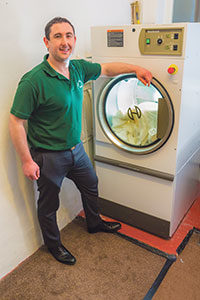 The hotel has 28 bedrooms of which 26 are en suite plus a six bed holiday house.

It operates at pretty much full occupancy during the season which is from March to November, but is open all year – though Ian does say that they will close for a few days occasionally in the winter if bookings just don’t justify opening.

The hotel’s on premises laundry includes three Huebsch tumble dryers supplied by Armstrong Commercial Laundry Systems, one of which is quite new while the other two have been on site for many years. All the hotel’s laundry is done in house. One member of staff can service the laundry whilst keeping an eye on reception. A 30 minute wash cycle, followed by a 30 minute dry time, means that the laundry is all done within a couple of hours, quite easy really.

Ian keeps a very close eye on his expenditure and knows accurately what he spends each year on replacement linen and towels, gas, water, chemicals and a proportion of staff costing. He says that he has contract laundry companies knocking on his door every year but, he explained, “I reckon I save more than 65% by doing it in house.”