Pump and motor manufacturer Hayward Tyler based in Luton, Bedfordshire developed a new Reactor Coolant Pump (RCP) suitable for small modular reactors (SMRs) in support of the UK Government initiative to roll out a fleet of more than a dozen reactors that could be up and running by the early 2030s.

The gas bills crisis has sharpened the focus on investment in nuclear to build up the UK’s energy supplies and complement renewable energy sources as Britain tries to hit net zero carbon by 2050. Britain is already facing a hole in its nuclear supplies with six large plants due to be taken offline by 2030.

SMRs are advanced power plants that can be largely built-in factories as modules to minimise costly on-site construction, and which allow manufacturers to reduce costs by producing many identical units. More than 70 designs of small modular reactor are in development in 18 countries around the world, mostly based on Gen III+ reactor technologies which are relatively close to commercial readiness.

“Although there are different types of SMRs being developed by major players, water-cooled reactors remain very attractive and bring a new dimension to the more reliable, clean and affordable nuclear power,” said Dr Evgeny Polyakov, Sales Director at Hayward Tyler. 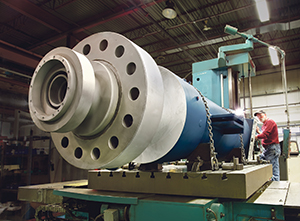 To date concept design, verification and validation, along with an extensive supply chain engagement programme, have been completed. Further projects will be completed on various areas of the design including detailed CFD analysis, prototype manufacture, quality control and lifecycle testing. Pumps for the reactor coolant system will primarily be made from low and zero-cobalt metal alloys which have minimal risk of suffering radiation-induced corrosion. Currently, there are very few UK manufacturers who have experience of working with these alloys.

“Reactor coolant pumps are safety critical which require a specific coast-down flow rate to ensure the necessary rate of heat removal is maintained during a power-outage to the pumps,” said Robert Bowen, Lead Design Engineer for the RCP project at Hayward Tyler. “To remove the complexities of dynamic sealing, the design uses an internal, high-inertia flywheel to achieve the coast-down flow. Reducing the large frictional losses by the large flywheel is a significant technical challenge which has required a combined input from the electrical, hydraulic, and mechanical expertise within our design team.”