iPort Rail, the UK’s newest inland port to become operational in the last 10 years, celebrated its first anniversary last month, one year after being formally opened by HRH The Princess Royal. 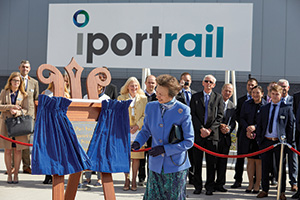 Since its launch, the 30-acre rail terminal has seen considerable growth, with GB Railfreight’s first commercial service to and from Southampton starting in September 2018, and in May and June this year, services started from Felixstowe and two services from Teesport, respectively.

In its first year, iPort Rail has taken 22,520 long-distance HGV journeys off the road, highlighting both the cost-efficient and eco-friendly benefits of transporting freight by rail.

The hub now operates four daily services every weekday and further discussions with operators are also underway with more services like to be announced before the end of the year.

“iPort Rail is already an outstanding success,” said Steve Freeman, Managing Director. “Within a year of our first service starting, we have seen significant growth serving businesses from across the region as well as national and international names, cementing iPort Rail as a truly global gateway for logistics businesses across the UK and beyond.

“Our successes over the last year highlights the growing significance of rail freight across the UK, due to rail being more cost efficient and reliable, and also a greener alternative when compared with other modes.

“We are proud of the numerous milestones we have achieved over the last year, which includes winning Major Project of the Year at this year’s Rail Industry Innovation Awards and being shortlisted for three other major industry awards.